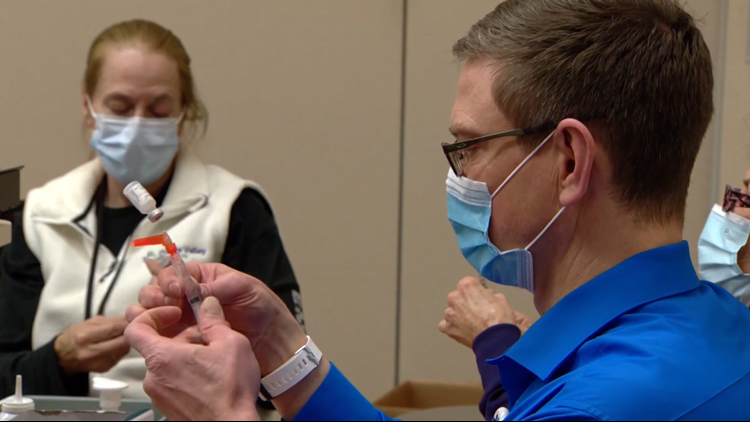 COLORADO, USA — President Joe Biden set a goal for July 4th and Colorado made it.

More than 70 percent of adults in Colorado have at least one dose of the COVID-19 vaccine.

“We are heading in the right direction,” said 9Health Expert Dr. Payal Kohli. “The more of the eligible adults that get the vaccine the better. But I have to say, in my mind, it is still falling short of where I would like to see us.”

Numbers from the Colorado Department of Public Health and Environment (CDPHE) show a majority of counties are nowhere near the 70 percent mark for the eligible population.

As of Sunday, July 4, 12 out of 64 counties in Colorado have vaccinated at least 70 percent of its eligible population with one dose.

Dr. Kohli is keeping a close eye on the herd immunity threshold, which has been based on the entire population, not just adults.

“The 70 percent goal mark we had set for herd immunity was based firstly on the original Wuhan strain of the virus, which was substantially less infectious than the current delta strain which is dominant,” she said.

According to the most recent state data, the Delta variant makes up almost 75 percent of variant cases in Colorado. Because it is more infectious, Dr. Kohli said the herd immunity mark bumped up.

“We are talking about 80 to 85 percent of the entire population, which includes our kids,” she said. “Because that is really how the virus stops to spread, if it stops finding eligible hosts.”

She doesn’t want people to panic because there is reason to celebrate. Dr. Kohli just hopes more people get vaccinated.

Even with the Delta variant becoming the dominant strain in Colorado, the state’s positivity rate and testing numbers are way down. Hospitalizations are also decreasing, but they’re still higher than lulls last year.

RELATED: Fauci: 99% of US virus deaths are unvaccinated people

RELATED: 70% of Colorado adults have received at least one dose of the COVID-19 vaccine

Fauci: 99% of US virus deaths are unvaccinated
Here’s why there’s a need to collect SO/GI data